Category: The Garden, The House, The Village, The Workshop Leave a Comment

Our first day at our new home did not go exactly as we had planned. Choosing to move in the height of summer you would expect the weather to be a little kind, not the wettest day of the year. According to the statisticians it was the most rain that had fallen in one day since the millennium began. I was not going to let the weather dampen my spirits and barely gave a thought to the possibility of floods or any other problems getting in the way of our dream move.

We were fairly well prepared for the move. I had packed all our belongings into labelled boxes and transported some of our old furniture into storage to make our unpacking less complicated. My parents had arrived a few days earlier, to support us during the move and house sit the following weekend, when we were attending a wedding in Formby. My dad helped me to empty the loft and then move the chicken run to our neighbours where they would spend a short holiday. Katie was six months into another difficult pregnancy, with a toddler in tow, which left the manual labour to me during the weeks before the move. Inconveniently I had two stag weekends and a golf weekend during May that reduced my availability to the evenings following work and a whole week that I had planned off before the big day. I am not sure how we would have coped had my parents not arrived on the Monday. Over the next three days we managed to finish the packing, clean up the chicken’s mess in the garden and tidied the house to our satisfaction.

Friday soon arrived, the removal men turned up on time and began emptying our old house. It quickly became apparent to the foreman of the team that their lorry would not be large enough to hold all our belongings. A hasty phone call later and another removal truck arrived, driven by a slightly annoyed employee, who had planned a leisurely afternoon at his local public house. There was little for my dad and I to do, but wait until they had completed the removal. Katie, Matilda and my mum had left early that morning for the calm and a safety of my father-in-law’s house.

We had the call from the solicitors very early in the day to confirm that the sale had gone through. Shortly after midday Katie and my mum left to meet the previous owner of our new home to collect the keys. The removal men left a short time later while my dad and I waited impatiently for cleaners to finish dusting and vacuuming the old house for our successors. At half past one we were able to wave goodbye to the old place and head toward our new home.

The rain was not heavy, but consistent the whole day. Katie had mentioned there were reports of flooding in the villages around our destination. The road out of our village was closed, meaning there was just one route in. The journey was reassuringly uneventful and thirty minutes later we were only a mile from the house. Then we reached the first sign of floodwater. The road was passable provided we took a route down the centre of the carriageway. I drove slowly to avoid flooding the engine and continued forward. At the Hunter public house the road was interrupted by another lake of floodwater. Several cars had been abandoned in the road, having failed to complete the short drive through the water. Fortunately our village was a short distance after a right turn just before the Hunter. As we drove up the slight incline into the village I was glad to know the climb probably meant our house was unlikely to have been affected by floodwater. Just before we made the final turn into the private road where our house stood we noticed that the main road out of the village had been closed. Those who had been stranded taking refuge in the other village public house, The Greyhound Inn.

As we approached the house we could see the removal vans swapping places on our driveway. The additional van had already emptied our gardening equipment on to the front lawn and my tools into the garage. I could see Katie waiting by the front door. She was smiling, which reassured me that our house was dry and that everything was going according to plan. Although I could see the drainage ditches either side of the unadopted road were full and the rain was still coming down.

The removal team soldiered on, emptying the rest of our belongings into the house. They were done by five in the afternoon. They had not stopped, they had not complained and they had worked hard all day in rain. Our first dealings with Staffordshire tradesmen was to foreshadow our future experiences; reasonably priced, friendly and agreeable. I doff my hat to Pecks Removals and Storage.

In addition to the two public houses the village boasted only one other retail business, a curry house. Therefore we decided on a take-away as the first meal in our new house, hoping that this could be classed as ‘local food’. Katie had sensibly packed a box specifically for moving day, with four plates, glasses and cutlery. So when my dad and I returned home, via a pint at the Hunter, we tucked into our curries surrounded by a hundred unpacked boxes. 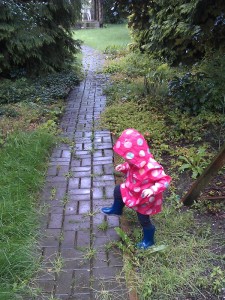 Matilda making herself at home in our new back garden

Matilda felt at home the moment we arrived. She donned her wellies and raincoat and dragged Katie with her to explore the garden. Our previous house had a back garden the size of a postage stamp. The new garden was fifty yards long and contained twenty trees that obscured the view from the house to the workshop at the end. Matilda discovered, much to her delight, that the previous occupants had left behind their playhouse, swings and climbing frame. We would encounter several more unexpected treasures in the weeks that followed as we began to explore the new Elliff family home.