Category: Chickens, Fruit, Maintenance, The Allotment, The Field, The House, The Workshop, Vegetables Leave a Comment 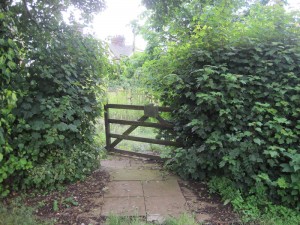 The entrance to the croft

We discovered that the allotment and the croft had been neglected for the passed six months. The weeds had taken over, some were eight feet in height and obscured the allotment beds from view. Grass and dandelions were consuming the ornamental stones that were supposed to suppress them. The entrance to the croft was almost hidden, the hedges had ballooned in size during the recent mix of sunshine and rain.

The overgrown entrance to the cattery

There was a cattery next to the field that had for the last twenty years been home to rescue cats. We were in no position to take this responsibility on, especially as Katie was allergic to cats and pregnant. The cattery building was obscured by vines that had been left to grow for many years into an organic roof covering. The wooden structure partially eaten and strangled by this relentless parasite.

The only areas that had been maintained recently were the old chicken enclosure and a small fruit bed containing several strawberry, raspberry and rhubarb plants. The previous owner’s chickens had eaten all the weeds and grasses in the enclosure leaving the ground clear. The surface was partially covered in bark, the centre had a concrete base that must have been intended as the foundation for an incomplete building.

During this first visit to our new allotment we happily picked all the fruit that had ripened on the plants and broke off the mature stalks from the rhubarb. Katie made several rhubarb cakes and we were able to harvest the stalks and berries for several weeks. Some were frozen, but most were offered to guests as they made their first visit to our new home.

Our first task in the house would be to work out that we had all the keys for all the locks of the property. The previous owner had left us a bowl full of keys. None of the keys were labelled, so we began by trying each key in every lock we found. We had already two sets of front door keys that Katie had collected from the owner on moving day. After an hour we had three sets of keys for the workshop, three for the conservatory, ten for the windows, two for the kitchen, one for the boiler and two for the garage. Once all the useful keys had been set aside we had another dozen that appeared to have no home and no purpose. I guess this to be a typical situation in most households. If all the orphaned keys were collected together from every home there would be a mountain of keys the size of Everest.

We performed the usual checks on the house to make sure all the services and appliances were functioning correctly. The house was in general good order, but one issue that we discovered immediately was a constant trickle of water escaping through the overflow pipe from the water tank in the bathroom. My dad decided to investigate and inadvertently snapped the cold water tank ball valve. He rushed down the stairwell into the kitchen to switch off the stop-cock and avoid flooding the house. The valve had broken because the float was too small and the valve was submerged permanently in cold water. Over the years the metal had corroded and a small amount of force snapped it clean off. A quick visit to the DIY store later, we fitted a new valve and a large ball float to prevent the water submerging the valve in future.

One of our ambitions for our dream house was to have an open log fire. We were lucky that this house had two chimneys and two log burners. Each multi-fuel stove appeared to be reasonably new and in working order. We had been left a receipt from a chimney sweep who had cleaned the chimney in the lounge, so we decided to test it out and build our first fire. The stove came with instructions on how to maintain the fire and optimise the heat it produced. We ignored them, piled in some coal, kindling, rolled up newspaper and lit the fire. It was not long before we had a roaring flame and the wonderful aroma of charred wood permeating the house.

There was a workshop at the bottom of the garden behind a two metre fence. The previous owners had used the building to house two greyhounds. The interior was partitioned into two pens, each with a raised wooden bed board and a door to access an external pen where the dogs would exercise. The building had running water and electricity. The power was provided by a fifty metre extension lead that wound its way down the garden from the conservatory. This was not terribly safe and at risk of a wayward lawn mover. We had an armoured cable and additional fuse wiring on our long list of home improvements.

The water pipe followed the cable down the side of the garden to the workshop. It was in several sections partly due to damaged pipe having been replaced. I am not sure how they managed to damage the pipe, which was an adequate thickness. A misplaced spade or edging tool perhaps. Despite the revisions we discovered that the pipe was leaking in several places where the joints were not sealing correctly and the plastic tap inside the workshop was dripping slowly into a bucket for the same reason. Initially we tried replacing the tap, but came to the conclusion that we were unlikely to need running water in the workshop. Therefore we saved some time and removed the long stretch of pipework. Where the external water pipe began we fitted an outside tap on to the utility room brickwork. With our old hose reel attached we had sufficient range to reach most parts of the garden. We kept the large blue water pipe, because we have learnt over the years that nearly every unemployed item of equipment will eventually have its uses. 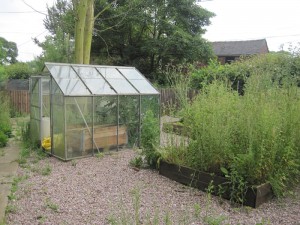 The croft too needed some urgent maintenance. In was in danger of disappearing behind a wall of branches and weeds. The green veil made exploration a more exciting event and exaggerated its size, but we would need to clear the croft if it were to become a practical space to grow produce and keep livestock.

We hacked away at the hedges by the entrance and dug up the grass that had grown over the ground. There was now a clear paved driveway connecting the road to the croft gate, across a grass verge and where, we presumed, the hedgerow had continued. The wooden gate was rotten and in need of a replacement. It had a rubber wheel on its base to assist opening and that was all the prevented its weight from wrenching the rusty hinges from the fence post. Another item to add to our list of required improvements.

We would be collecting the chickens imminently so we had to locate an area within the croft that they would call home. The area where the previous owner had allocated for her chickens was reasonable large and open. The ground was bare, covered in bark and concrete. It did not seem like an appealing site or completely safe from an agile fox. The cattery seemed like the obvious choice. It was enclosed in wire mesh, safe from any canine, feline or winged invaders. The main area had two rows of pens, each sectioned off by galvanised steel mesh. Every pen had a lockable door, a shelf, a wooden cat box and an electric socket. One of the home-made boxes still had an electric blanket plugged inside. A gangway between the two rows led to the detainees exercise yard. It was another thirty feet long and completely enclosed. There were shrubs, small trees and grasses enjoying the animal free environment. 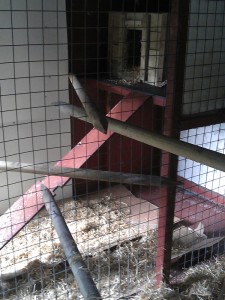 The two cat pens we converted into a chicken house

The cat boxes made perfect nesting boxes and each pen would be ideal for our chickens to roost overnight. We isolated two pens at the entrance to the run from the rest of the cattery by removing their doors and fixing them across the gangway entrance. Several round wooden stakes were used to create perches inside the pens and two planks of wood were rested against the shelves to allow the hens to walk up to their new nesting box. We put down a layer of cardboard on the floor and scattered straw inside the pens ready for their return the following week. The chickens would make light work of clearing the yard of weeds and grass. We were very fortunate to have the infrastructure already in place to house our birds and easily expand our flock in the future.