The chicken’s vacation was over when we returned to our old house to collect the hens from our neighbour’s garden. They briefly resisted capture as each hen was placed into a cardboard box ready for transportation. We had decided to dismantle the chicken run and take the remains for recycling. Their new home was complete, ready and waiting for them. It would have taken far longer to dismantle the run, to avoid damaging the rotting frame, and it required a second journey home. It took less than an hour to take the chicken run to pieces using a hammer, a saw and a brute force. I loaded the broken remnants into the car, tied the rotten frame to the roof-rack and drove five miles to the nearest recycling centre. 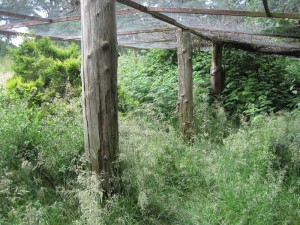 The cattery run before the chickens were released

Following a chat with our old neighbours to catch up with local events we drove home. We released the chickens into the cattery run and left them to familiarise themselves with their new residence. They quickly made themselves at home, scratching at the virgin ground and exploring the undergrowth.

There were so many tasks and projects that we wanted to complete it was difficult to know where to start. Matilda was in the care of Katie’s parents which allowed both of us the freedom to spend a full day on the allotment.

The previous owners had constructed three raised beds a foot in height and six feet wide. Each were a different size; thirty feet, twenty-four feet and twelve feet in length. The smallest bed had been maintained over the past six months. The other two allotment beds had been left in the hands of nature. The result was a forest of weeds eight feet tall. The smaller bed had raspberries, strawberries and rhubarb growing in it quite satisfactorily, with only a small number of weeds. It needed some additional care, but not major restoration work like the other two beds. 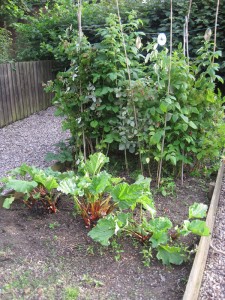 Raspberry canes, strawberry and rhubarb plants left to grow in the allotment

Katie set to work picking the ripe berries and clearing the weeds that were crowding the fruitful plants. Any dead, damaged or deceased plants or rhubarb stalks were removed and added to the compost. Katie’s tortuous pregnancy did not allow her to do too much physical activity so this task was more than enough.

I tackled the first of the other two overgrown allotment beds. The weeds were taller than me, but the roots were fairly shallow. The various grasses and plants had all gone to seed and therefore I expected a reasonable amount of regrowth after clearing them. I progressed from one end of the bed to the other, systematically pulling out the weeds, trying doggedly to keep the roots intact. It took the whole afternoon to completely remove all the weeds. Among the thistles, groundsel, chickweed, fat-hen were a dozen parsnips that must have been sown a year earlier.

I piled the weeds into a wheelbarrow and unloaded them onto the concrete base, with the expectation that they would be added to a compost heap. I knew it was a bad idea adding weeds in seed directly into a compost heap, but once they had been drowned for several weeks I would be able to utilise the organic waste in my heap. At present I had no compost heap constructed or a bin to drown them in. 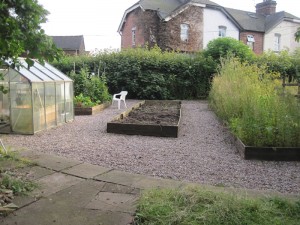 The allotment bed had lost a fair amount of soil. It was clumped into the roots of the weeds that have been removed. I avoided disturbing the weed heads and roots to lessen the possibility that they would shed their seeds. We would be improving the soil in any case, adding compost and rotted manure once we had located a supplier or generated our own. We had no idea of the source for the previous owners soil. It seemed fertile as demonstrated by the exaggerated weed growth. It was had a slightly clay consistency and a loamy texture. To my amateur eyes it appeared to be good stuff, but without testing it we had no idea of its origin. We hoped no chemicals had been used to fertilise the soil, as we would eventually digest produce grown in these allotment beds.

Katie returned to the house after harvesting several bowls of strawberries, raspberries and a bucket of rhubarb stalks. She spent the evening baking several rhubarb sponge cakes. One cake was delivered to each of our immediate neighbours and the ice-breaker was very much appreciated. The berries were washed and frozen to be offered to friends and family who would visit our new home over the first few weeks.