Category: Compost, Maintenance, The Allotment, The Field, The Garden, The House, The Village, Trees Leave a Comment

The largest allotment bed took a little longer than the first to clear of weeds. I repeated the process of the previous weekend, progressing along the length of the bed pulling the weeds out of the soil. I completed three separate shifts removing the weeds and wheeling several dozen barrows to the temporary compost pile. 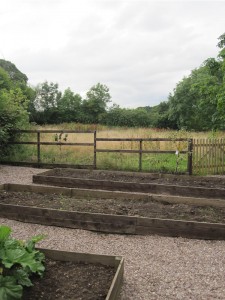 The three allotment beds after they had been cleared of weeds

Like many gardeners I found the act of weeding therapeutic and good exercise. We had not bought a home with land to satisfy a theological principle. We were seeking a more natural, peaceful and local way of life. There would be no need to join a gym; the land management would provide all the exercise we needed and save money instead of costing us money.  There would be no need to travel by car to the country park; we had the countryside on our doorstep and several bridleways crossing our road. We felt there would be no need to take a holiday; we had moved to a location that was far removed from the rat-race.

We had already discovered we were watching very little television. Our free time was used more productively, maintaining our new home or investigating the local area. A difficultly we could see on the horizon that would interrupt our progress was the imminent arrival of our second child. How much time two children will occupy would have a bearing on what we could achieve and in what time.

Most of the initial tasks involved maintenance and restoration. In our back garden, to avoid any unnecessary injuries to myself, my family or any visitors, I trimmed all the low hanging branches. There were more than twenty trees dotted around the garden and it was apparent that more radical maintenance would be needed to make the garden a more usable space. The trees hid the bottom half of the garden. It was dark, damp and a mess. I lacked any tree felling equipment or lumberjack experience, so I decided to postpone tree management to another day.

I moved my attention to the old cattery. It had been constructed twenty years ago and appeared that it would be able to serve its purpose for twenty more. However, the cattery was being consumed by vines that had been intentionally planted around the perimeter. The vines covered the roof and protected you temporarily from the rain, until the rainwater began to drip down long after the rain had subsided. The cattery was dark and damp as a result. The paved floor green and slippery under foot.

I decided to cut down all the vines and bushes surrounding the cattery. The vines served no real purpose and would only get in the way of any improvements to the structure. The task was made complicated by the growth of the branches weaving in and out of the steel mesh. I cut all the visible branches that wove under the mesh roof enabling me to pull most of the vine structure from the roof. I had to cut the branches in many places, every two inches in some cases, to separate the plant from the wire. 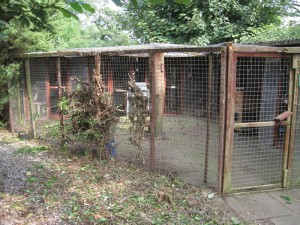 Several days of cutting, pulling and sawing removed most of the vines. I left part of the vine structure in place to maintain the structural integrity of the cattery wall. The wooden supports had rotten away in places, or had been eaten away by the insects living in the vine architecture. If we decided to keep the cattery in its present design we would need to replace several of the wooden pillars and finally remove the main trunk of the vine plant.

There were smaller maintenance tasks I slowly chipped away at over the passing days. Each time I left the house or returned from the croft I kept an eye out for weeds growing through our gravel driveway. My neighbour had commented the first time I pulled at a lone weed among the stones that it would be a futile task removing them. He had abandoned the idea long ago. I thought I would give it a try. The weeds would never be eradicated completely from the driveway due to the nature of its construction, but I hoped I would keep the worst of them at bay.