I longed to be able to spend more hours each week managing our smallholding and preparing the allotment for the new year. Unfortunately we had bills to pay and I would need to work full-time for the foreseeable future. Katie was busy managing the house and caring for our young family.

I was fortunate to work from home and be self-employed, which allowed me to dictate the hours that I worked. When the weather was favourable I would postpone an afternoon behind the desk and take the short walk across the road to the croft.

During the afternoon breaks in my work this week I continued removing the weeds from allotment. Each time I pottered over there seemed to be several more that I had missed among the stones or an area I had not tackled. 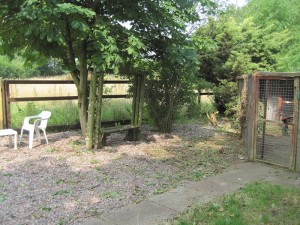 While I picked away at the ground I would stare at the handful of trees beside the cattery and wonder if they should be removed. The area was a waste of space between the field and cattery. Stones covered the ground, but as no membrane was beneath them the weeds had run riot. A mature chestnut tree was the dominant feature, but there were several other young trees trying to grow in its shadow.

It made sense to me that the fence to the field should continue in a straight line to the entrance of the cattery. The small cluster of trees would be moved into the field and the unused space made to be productive. The chestnut tree would be spared the chop, because it was a focal feature of the croft and we imagined that our children would enjoy collecting its conkers every autumn.

I decided to begin removing the smaller trees and harvesting the wood. I did not have a chainsaw or a wood-chipper, so I sawed down the first few trees, cutting the small trunks and larger branches into fire-sticks. The remaining twigs and foliage I placed in the household recycle bin. I left the tree stumps in the ground for future removal.

Our young apple tree, having survived the move in a plant pot, is transplanted to the field

When we moved we had brought with us two young fruit trees that Katie had purchased for a few pounds in the spring. They were only six feet tall and I had temporarily planted them in pots to keep them alive. They had been sat in the allotment for the past month waiting to be utilised. The apple tree had developed fruit, whilst the cherry tree had not, and did not look like it ever would.

I added the cherry tree to our growing pile of compostable greenery, but decided that I would plant the apple tree in the field rather than waste it. It had borne fruit this summer and may continue its progress next year. We had not planned where our orchard would be located, so I picked a spot close to the allotment.

Over the next few days the leaves began to wilt and the last apples dropped to the floor. I was aware that trees hated being transplanted. I had my fingers crossed that the downturn in the tree’s health would be temporary or related to the approaching autumn season.

One Response to A very sick apple tree