Category: Maintenance, The Allotment, The House Leave a Comment

We hoped that we would never need to move home again. We took great care in choosing our new home within the limited budget that we had. One of the primary criteria was that the house had the potential to be extended. We did not have the lending criteria or the personal finances to purchase a house with all the features we ultimately desired, largely due to my self-employment and our decision to start a family. However with the ability to extend the house we may be able to achieve our ultimate objectives. 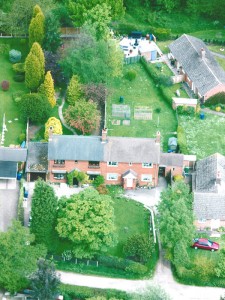 With the future in mind we asked a friend, who happened to be an architect, to visit and give us some advice on extending the family home. One pressing requirement would be an office for my business. I was occupying one of the three bedrooms. This would not be feasible if I were to grow the business and would mean that our children had to share a single bedroom.

Following our discussion, and mulling over the various options, we concluded that a simple solution was to convert the garage into an office. The more financially efficient way forward would be to make all the alterations we desired in one build. Therefore we commissioned the architect to draw up plans for an extension that included an office, a larger utility room, a wet room, an additional bedroom and a dining room. We deferred calculating how we would finance the building work until we had finalised the plans.

Talking through the ideas for our home filled us with excitement and renewed motivation, if any more was needed, to make our smallholding exactly how we wished. We had been lucky to achieve most of our goals in the past and we hoped that our luck would continue.

This week I continued the maintenance tasks over at the croft. I trimmed the hedges inside the allotment and those surrounding the old chicken enclosure with a pair of ratchet loppers.

The hedges that spanned the boundary all needed cutting down to a sensible level. There were two hundred metres of hedges running along the two adjacent roads. The task seemed daunting for a single person and a pair of shears.

We made enquiries to establish how they had been maintained previously and were given the names of various local farmers. We would follow these up at a later date, if the farmer and his tractor did not show up in the meantime. 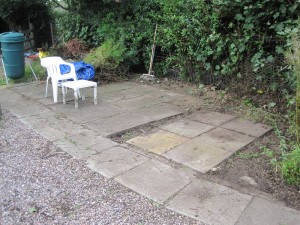 In the allotment there was a large paved area covered with weeds that had sprouted from the gaps between the slabs and the dirt that had accumulated on the surface. I took a spade and began slicing the weeds from the paving and pulling out the roots. After several hours spanning two afternoons I had revealed a paved area of approximately twenty square feet in size. The section of paving near the entrance was still covered with a pile of rubble the previous owners had left us. This was another task that required additional help, this time in the shape of a skip.

While I was across the road clearing the allotment Katie was performing some maintenance of her own. The task appeared to be minor; There was a small shelf in the kitchen that was hanging loosely from the wall. It was located above the cooker and kettle sockets. Katie removed the shelf and started to re-install the shelf bracket. Whilst inserting one of the screws Katie was surprised to receive a slight electric shock. She assumed it was a static charge, but when Katie touched the metal bracket she received another small shock. As a safety precaution we manually tripped the circuit breaker and inspected the wall fixings.

It transpired that one of the screws had touched the live wire that fed the cooker socket below. The past inhabitants must have known this was an issue because they had added a wall plug, but not fixed the screw to the bracket. I removed the wall plug and further inspection revealed that they had drilled through the outer casing of the cable and the red plastic covering the live wire.

The socket circuit appeared to function correctly even with the damage it had sustained. Following a brief discussion with an electrician I filled all the screw holes with plaster filler to avoid an unnecessary bill for restoration work. I was beginning to form the opinion that rewiring the house may be a good option to add to our plan to extend the house, budget permitting.