Category: Ducks, The Garden, The House Leave a Comment

An important characteristic of the house that we had chosen to make our home were the generous front and rear gardens. We are settling down with our family and wanted the children to have plenty of outside space to play in. Our playground would be the land across the road and they would have the gardens. We had also been lucky that the previous owners had abandoned a large playhouse and a climbing frame in the back garden. Both structures were sound and reasonable new. The play area would need to be cleared and the surrounding garden made safe for toddlers.

One important feature that was missing from the gardens were secure gates to prevent young children from running out into the road. The passage beside the house was only half a metre wide, but would allow an unsupervised child to leave the back garden and access the driveway. The driveway gates were broken and provided an easy means of escape, especially for our mischievous daughter.

Beside the playhouse a small enclosure had been built to contain pet ducks. A small duck house was located behind the playhouse wedged between the playhouse and the perimeter fence. A two bar fence began at the boundary fence and ran to the central pathway separating the poultry from the main garden. The duck enclosure was entered through a small gate from the pathway.

It occurred to me that the gate would make a suitable side entrance. We had already made the decision that all livestock would be housed on the croft, the duck enclosure was threfore surplus to requirements. It did not take long to remove the gate, retaining the post it was anchored to and unscrew the latch from the opposite fence post. 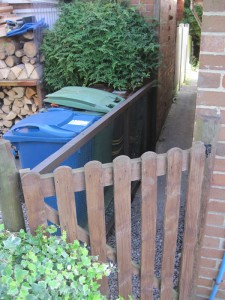 An ivy covered fence divided our driveway from our neighbours, but it stopped short, a foot before our garage wall. Our neighbours had a car port and still had the original outbuilding at the side of their house. The outbuilding was three metres further back from the end of the fence and started on the boundary to our properties. This created a three metre gap that a child could easily toddle through, escaping via the neighbour’s car port.

I used several wooden beams I had won at an auction the previous week to construct a frame that would span the gap. I painted the wood dark brown using a small paint pot I found in the garage. A section of dark green chicken wire was nailed to the frame to complete my improvised fence.

I managed to secure the gate post to an original concrete post, hidden under the ivy, installed by the council when the properties were constructed in nineteen forty-eight. The new fence was screwed to the wooden gate post and to the corner of our neighbour’s outbuilding. The gate closed against the corner of the garage wall at a thirty degree angle. Our back garden was now secure.