Category: Maintenance, The Field, The Garden, Trees Leave a Comment

The last few months had seen several days of torrential rain. Following one of our wetter summer days I wandered into the cattery to collect a pair of gardening gloves. I noticed that the ceiling of the second cat pen was dripping wet. On further inspection where I had stacked all our seed trays there were several plant pots full of water. The wooden ceiling was bowed, the centre a foot lower than the edges. A single mushroom was taking advantage of the damp conditions and hung from the ceiling.

I emptied the handily placed pots of water when I ventured outside to investigate the roof covering. The previous owners must have known there was a problem because they had placed a tarpaulin on the roof with bricks holding it down. Unfortunately the tarpaulin did not completely cover the roof, the rainwater ran merrily passed the tarpaulin and through the cracks in the plastic roof sheets. The sheets were sat on the original wood and felt roof. Lifting up the plastic I discovered a large pool of water on the felt.

I climbed on to the cattery roof and made a full inspection of the plastic roof sheets. There were half a dozen cracks along the line of the perimeter fence. I presumed that broken branches from the trees above had caused the damage. The plastic was thin and not designed for heavy weights.

I rearranged the tarpaulin to completely cover the worst of the damage, allowing the rain to run into the gutter. I had to clear debris from the gutter to let the water to drain freely and brushed the collected pool of water from the roof space. I hoped that my minor reparation would be sufficient to prevent further damage to the roof.

My sister had started clearing ivy from the driveway front gates of when her family had visited a fortnight ago. She had been using a hedge trimmer, but stopped when the trimmer stopped working. We discovered later that she had sliced through the power cord. 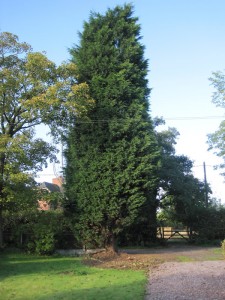 The front entrance with the delapidated gates and fencing removed

The front gates were on their last legs. The fence posts were rotten and were likely to collapse at any time. We had decided that we would replace the gates to secure the front garden and prevent our children from running into the road. The fence that led from the gate to the edge of the road was barely visible. It had deteriorated more than the gates, consumed by ivy and wild shrubs. We were planning to clear this area and cut down the sixty foot leylandii tree.

While Katie was out with Matilda I decided to start removing the gates. Both gates lifted from the ground without much of a fight. I moved on to the fence and began hacking away at the ivy. I cut down two small trees that had rooted themselves among the shrubbery and cut the ivy at its root. A few hours later I had cleared the area leaving the large leylandii exposed in preparation for the visit of the tree surgeons in a month’s time.

Over the past few weeks I had been taking rubble bags full of branches and foliage to the local recycling centres. It seemed that there would be a regular need to dispose of branches and other woody material that was unsuitable for our log burner or any other purpose. To avoid repeated ten mile round trips to the recycling centre I purchased a small incinerator. We had one of these small metal bins at our last house, but it had disintegrated through frequent use and exposure to the elements.

After I had started my bonfire I was informed by a neighbour that a previous tenant had dug a fire pit in the field. This may be an option for us in the future, but for now a small metal incinerator would be adequate. I had positioned it on the base of the old greenhouse a safe distance from the perimeter and overhanging trees. I cut branches into foot long sticks and separated them into two piles, those thick enough to use as kindling and those fit only for incineration. The smoke billowed out through the chimney lid, across the allotment and was dispersed by the hedges before it reached any of our neighbours.