A very bad use of space

Since the move to our new home I had focused my spare time maintaining the croft and preparing the land for the following year. I had neglected the house itself, which fortunately for us was reasonably well decorated. We had hung several pictures, mirrors, shelves and curtain poles, but the house was largely as it was on the day that we moved in.

A few days trapped in the house by the rain turned our attention to our homestead. We had moved in with the intention of converting the garage into an office. I was occupying one of the bedrooms, sharing it with the nursery. As a location for my small business it was far from perfect.

We invited two local builders to the house to discuss extending the building and converting the garage. We wanted a rough idea of the budget we required to build an office and also to extend the rear of the house, adding a fourth bedroom and a dining room. Both builders provided an equivalent ballpark cost that sounded reasonable and within our reach via a remortgage. The builders were equally successful in failing to follow up their verbal quotes with a concrete proposal. However, we had an idea of the cost and therefore our architect, whom was already drawing up plans for the extension, would not be wasting their time.

While we waited in hope that the house would grow in size we tried several ways to improve the space upstairs. One simple measure was to remove the fitted wardrobe that had been left in the master bedroom. This had reduced the room’s capacity by a fifth and meant that we could only get into our king-size bed from one side. The room had already been reduced in size at some point in the past to double the width of the adjacent bathroom.

I dismantled the huge wardrobe units and transported the heavy panels to the workshop. We repositioned our bed in the centre of the room facing the window, overlooking the front garden and the croft opposite. We left the bedroom wall with screw-holes exposed in the expectation that we will be decorating the house following the much anticipated extension. 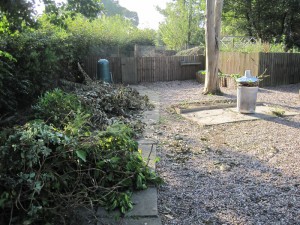 During intervals in the rain showers I continued use of our new incinerator burning the branches, shrubs and vines that had previously been removed from areas of the croft. I also dismantled a bench that had been constructed under the chestnut tree. It had an ornamental rose growing up either end of the bench, wrapped around thick posts that held up a small canopy. The plant had grown like a beanstalk into the chestnut tree. The main trunk several inches thick and extending a dozen metres into the tree. I pulled the bench posts out of the ground and severed the rose plant at its root. The large thorns proved tricky to avoid as I pulled the thick stems from the boughs of the tree. I chopped up the woody plant and added the sticks to the bonfire.