Category: Maintenance, The Allotment, The Garden, The Village, Trees Leave a Comment

We began searching for a trailer after we had the tow-bar fitted the previous week. A trailer would allow us to collect equipment, livestock and resources more easily. We saw the trailer as an investment. It would retain most of its value and it will save money on delivery charges and fuel.

We were lucky to find an alternative six foot livestock trailer for sale on the Internet. It had a detachable canopy, enough space to carry two large pigs and had been used infrequently. We arranged to collect the trailer from the owner whom lived just across the border in Wales.

It would take ninety minutes to drive from our home in Staffordshire, across Cheshire and into Wales. We did not realise it at the time, but the route we had chosen passed by numerous locations from our recent past.

We discovered that our destination was situated a mile from a house we had viewed the previous year. It had ten acres of land included in the sale, but the elderly vendors had sold the farmyard and an adjacent nine acres to a developer. This required an entrance to be added that cut across the remaining stretch of grass connecting the crumbling farmhouse with the two five acre fields. It was a despairing, but an often repeated situation for smallholdings or farms without heirs. The prime land would be sold to developers or consumed by neighbouring farms, leaving the old farmhouse isolated and uneconomic as a smallholding.

On the journey into Wales we also passed three other properties that we had viewed during our search for a suitable home. Each we had rejected for various reasons including their condition, size and locality. It made us realise how lucky we were to have stumbled upon our new house. 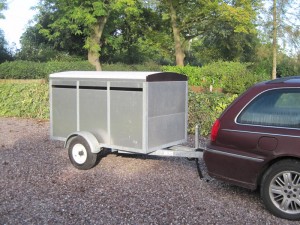 We collected the trailer from a fellow smallholder, paying in cash, and tentatively made our way home. We made a brief pit-stop to purchase a substantial motorbike lock and secured the trailer to the chestnut tree on the allotment.

During the first few months living in the village we had meet a majority of the residents and gleaned a lot of information about its history. One small question remained unanswered during all these conversations that was pertinent to our allotment. There was a small section of land that cut into the middle of our triangular plot, that no-one appeared to own. It measured only a handful of metres square, but it was an irritation and needed to be maintained.

The scrap of land had been neglected for over twenty years, so I made further enquiries to determine if any of the neighbouring residents would mind if I took ownership of this eyesore. I received no objections and therefore we removed our bounding fence and connected the perimeter fences that had previously navigated around the obstruction.

In August we had hired a tree surgeon to remove the sixty foot tree that loomed over the entrance to our house, and to extract the dead eucalyptus tree from the allotment. Two months later two men arrived equipped to fell the trees and then shred the evidence. 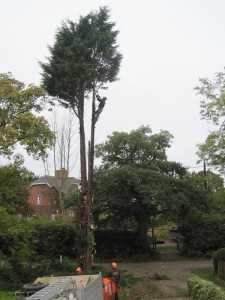 A tree surgeon removing the last few branches of the leylandii

We had requested that they leave us with all the logs and large branches for use as firewood on our log burners. The eucalyptus had died a year earlier and so the timber had already dried to a point where it was safe to burn the wood this winter.

The tree surgeons made light work of both trees. Climbing up, removing the branches as they went, before descending, chopping the trunk into manageable slices.

They had completed the work by the afternoon and we had a large pile of unprepared firewood that would last us more than a year. I took note of their branded equipment and bid them farewell.