The smallholder we had commissioned to build our shed returned this week to construct the outbuilding. He and his two colleagues had built and painted sections of the building back at his farm. This made assembly far easier, but the task still required three days hard graft from his labourers. The shed was built using a timber frame and plywood sheets, with corrugated metal sheets on the roof. It was a very solid structure. 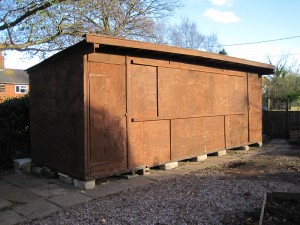 While delivering one of several trays of tea to the workmen I discussed other requirements that we had with the smallholder. As a result of our negotiations he later delivered thirty planks of wood for our allotment beds and a dozen corrugated metal sheets for a log store. I also mentioned that we would be adding a water butt to the shed, to collect rainwater that ran from the roof. Five pounds secured two large plastic barrels. The first barrel I would attach to guttering that I had ready to install, and the second I would use to drown weeds that could then be added to the compost heap.