The weeks following Sophia’s birth had not been kind.

Our dependence on our car was becoming apparent now that it was showing signs of unreliability. Our quiet rural location had many benefits, but the lack of facilities was telling for a young fragile family. Although the car had only developed one major fault and ingested a bad batch of diesel our trust had taken a knock.

The dent in our bank balance took another pounding when a freak gust of wind managed to blow open the metal coal bunker situated on the driveway. The concrete block holding down the broken lid down was thrown back into our neighbour’s driveway. It made a neat dent on the wing of their car. We had never used the coal bunker, it had been inherited from the previous occupants.

The saying that bad luck arrives in threes was proved accurate when our washing machine developed a terminal fault. For a toddler, two adults and a new born this was one of the most important appliances in the house. Therefore a third hefty chunk of money was handed over to acquire a new washing machine and a tumble dryer. 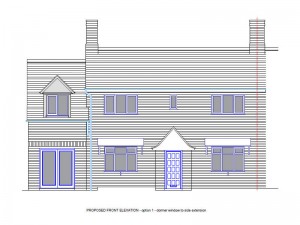 The front elevation of our house and the proposed side extension

In contrast to these adverse events our architect delivered draft plans for our proposed home extension. She had provided drawings for three alternate arrangements and many improvements on our original brief. We were excited by the prospect of realising our dream home and both agreed on the grand design that would be developed in full.