Category: The Allotment, The House, The Village Leave a Comment

To avoid all the work involved in preparing a Christmas Day meal we opted to have our family lunch at the local public house.

At the end of the week we attended the funeral for Katie’s step-grandfather, while my parents shielded our children from this somber event.

We received the updated plans for our proposed extension. They were now ready to be submitted to pre-planning where they would be reviewed by the council for their acceptability.

My father helped me add a gutter to the shed to collect rainwater in a water butt. He also helped move the remaining storage boxes from the garage to the workshop.

Category: Chickens, Compost, The House, The Workshop Leave a Comment

It was the week before Christmas and we were preparing for our first winter in the village. We had the chimney swept to clear a birds nest, thoroughly cleaned out the chicken run and topped up the compost heap before sealing it for the winter.

My parents made another visit to our home in time for our scheduled Christmas Day lunch at the pub. My father immediately found more work to do, adding an extra plug socket to the workshop and moving the strip lights away from our new shelving units. I had the shelving installed so that we could empty the garage of the remaining unopened storage boxes.

We had made enquiries to find out who cut the hedges around the field. The previous owner said that a local chap trimmed the hedges in exchange for a small donation. Various names had been mentioned by the villagers we questioned, but no-one had a definitive answer.

On our return home we passed a hedge cutter parked outside one of the village pubs. I interrupted a conversation between two farmers and asked if the tractor and it’s driver were available for hire. The surly farmer grunted an affirmative.

A few hours later he pulled up outside our house and applied a short back and sides to our hedgerow. He was unable to cut the hedge on the road opposite due to the unhelpful parking of our neighbours.

A note exchanged hands in recompense for his work. In our parting words I discovered that the farmer was the person that had previously been employed by our predecessors. I was not sure we would be using his services again due to our stilted conversations and his reluctance to provide any contact details.

Three adverse events occurred this week with different rates of severity. Katie was bedridden with an illness for several days and Katie’s step-grandfather passed away after a short illness. In-between these events I had my first car accident since the age of seventeen. It was only a minor incident; oversteer on a tight corner at low speed spinning the car around and sliding into the kerb. The rear alloy wheel was dented, but the visible damage was minor. 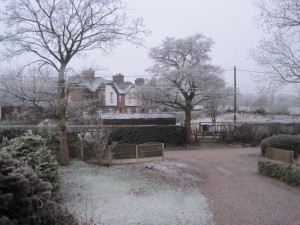 The first frost colours the landscape

Following our short vacation I went back to work, attempting to make up for the previous month’s parental leave.

The first frosts of winter had arrived and the warmth of the house was very appealing. My temporary office was on the first floor and provided a panoramic view of the whitened landscape.

Sophia meets her cousins for the first time

Due to Sophia’s arrival we had taken time away from our little smallholding to establish a new routine. A second child required both parents full attention; managing the demands of a new born and those of an unruly toddler. It would be some time before we were able to share any more uninterrupted peaceful hours on our allotment.

We took our first trip south to visit my parents and present our new daughter to my extended family. Our neighbours feed and watered the chickens while we had a short holiday away from the house.

Although the needs of our daughters remained we were able to relax for a few days in the company of my parents, without the additional need to clean the house, cook four meals and shop for groceries.