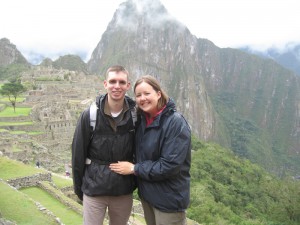 Martin and Katie at the summit of Machu Picchu in Peru

It is difficult to locate the exact moment we decided that we wanted to run our own smallholding. We had both enjoyed our lives so far and had a wide variety of experiences before we were married. We had travelled to many countries, held several diverse job roles and had developed a good circle of friends.

I tend to trace the idea back to when Katie decided we should travel to Peru, cycle five hundred miles along the Andes and raise money for charity. Peru was chosen due to my cousin being a resident there. This enabled us to extend our stay without incurring additional cost. It also allowed me to use my cousin’s local knowledge to plan a secret getaway to the Amazon jungle where I planned to deliver a proposal of marriage. I believe the experience of cycling through remote villages in Peru, seeing how simple and happy their lives appeared, to be the spark that set a chain of events in motion. 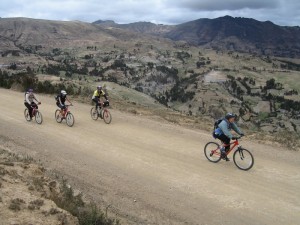 Cycling across the Andes in Peru during October and November 2006

We always had plans. We would take woodland walks and talk about our dreams and goals for the future. We had both experienced working for large corporations and small businesses, self-employment and voluntary work. We came to the conclusion that life should be enjoyed not endured. Money was necessary, but should never be a driving force in our lives. Therefore we laid out a series of steps we wished to take on our journey through life.

Our first step would be to rid ourselves of our wanderlust and take a year out to travel the world. The second step would be to find employment that enabled us to sever our ties with commuter living and allow us to move out of suburbia. The third step would be to find a semi-rural home with enough land to grow our own food and raise livestock. The fourth step would be to start a family. And the final step would be the unobtainable dream of self-sufficiency. Not because we were Eco-warriors, but primarily to avoid paying bills to large corporations and so that neither of us had to work full-time.

Unfortunately our plan got off to a terrible start. Following our marriage in the summer of 2008 disaster struck; the world entered an economic meltdown. As a result Katie lost her job when the company she was working for went bust. She was never paid her last two months wages, leaving a hole in our finances. It was going to be very difficult to sell our home in this economic climate and as the pound’s value plummeted the cost of travelling the world would begin to rise considerably. We took the regretful decision to skip the first step and bide our time. We managed to acquire an allotment locally and started learning how hard self-sufficiency can be to achieve.

A year later Katie had a stable job and I was looking at returning to self employment. We decided at Christmas that it was the right time to start trying for a family. We expected it would be several months or years before this would prove successful. To our surprise Katie fell pregnant immediately, a few days after I had decided to quit my job and begin working freelance. 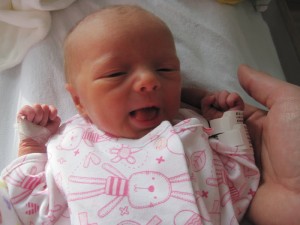 Two years later I had established my small business and worked from home. I had enough income to allow Katie to give up her job and concentrate her time on raising our growing family. When we had decided to try for child number two we calculated that Katie’s income would have been almost entirely consumed by the large monthly childcare fees. Remaining in employment was therefore pointless and meant that we were both, for the first time, free from any ties to a particular location. We were by no means rich or able to take our pick of any smallholding that took our fancy. We could not afford a property that cost any more than our own, a regular three bedroom house in a standard suburban cul-de-sac. This meant our choice was limited and made our long search for our dream home that much harder.

With our second child on the way we finally found a house that ticked enough boxes to enable us to move. It was in an area that we knew, within range of many friends and family, semi-rural, with the potential to extend and with the all important plot of farmland. The small three bedroom house was built just after the second world war and had a very generous front and rear garden. In addition there was a half acre field across the road from our house that had been split into an allotment, chicken run, cattery and paddock. 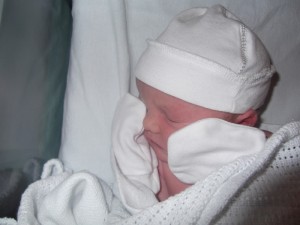 We were very lucky to stumble across this unique property during our very long search. We had been hunting for the right home for our new family for several years, that included scouting trips to Lincolnshire, Shropshire, Derbyshire, Cornwall, Devon and Wales. It would have cost double the asking price had the house been located in our commuter town in Cheshire and not in a tiny village in Staffordshire. Every time I step outside I smile at how fortunate we are to have acheived so much in so little time.

We had reached the penultimate step, we had our smallholding. The final step would take us on a journey into self-sufficiency, with a young family, a small plot of land and with the hope that our goal could be achieved on a very small budget.

2 Responses to About Us