We managed to acquire an allotment three years before we found our dream home. The allotment was on a paddock that the owner had converted to provide growing space for the local community. There were no council allotments in the town where we lived and very little land owned by the community. None suitable for allotments. We were lucky to have found an accommodating land owner only a few miles away and began cultivating the land. 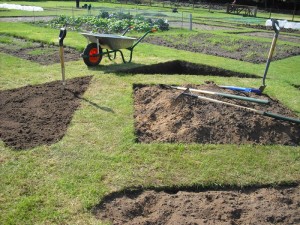 It was a sad day when we were forced to give up our allotment in the spring before we moved home. But it would have been foolish to start a new season growing produce that we would be unable to harvest, so we handed back the keys and gave another eager gardener a chance to grow.

The only crops we saved were the rhubarb crowns. These were transplanted into growbags and transported to our new house. As luck would have it the only produce the previous owner left behind were a few strawberry plants, raspberries and several rhubarb crowns. Katie spent the next few weeks baking rhubarb cake for all our visitors.

The new allotment was very overgrown, but had already been organised into three large raised beds. We needed to remove the forest of weeds, improve the soil and add in a few extra beds before we could begin developing our own kitchen garden.