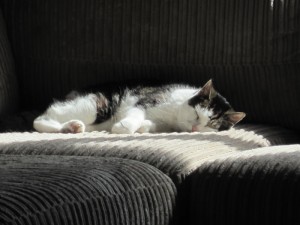 We arrived at our new home with Tabitha, our cat, a black and white tortoiseshell. Her brother, Jake, passed away a year earlier just a few days after the arrival of Matilda, our daughter. Tabitha was twenty, fit as a fiddle and looking likely to reach thirty, but quaking in her paws in anticipation of the imminent arrival of Matilda’s sibling. Tabitha was no mouser, so the smallholding would be her retirement home rather than a place of work. Fortunately there were several neighbourhood cats to perform that task for us and keep the rodent population away from our animal feed.

We had built up a flock of seven chickens at our small suburban home in Cheshire; Dolly, Molly, Polly, Ginger and the twins, plus Tikka the foster chicken. Dolly, Molly and Polly were hybrid Warrens, our first foray into animal husbandry. They are typical genetically engineered hens. Docile, naive and prolific layers of medium brown eggs, at least for the first year of their lives. Egg production dried up from year two, but as we are not a profit hungry supermarket they avoided being discarded. Instead our chickens could look forward to several years scratching about our rural retreat. Ginger and the twins were Cream Legbars, a pure bred hen we purchased from a local breeder. They were more cautious of humans, highly strung and laid smaller blue eggs. The Legbars produced less eggs each year then the hybrids, therefore inefficient for a supermarket, but they would continue laying for several years. Tikka was another pure breed, but we were unsure which breed she was. She had been given to us by our neighbours who had the rest of their small flock savaged by a fox. Tikka was larger than the other chickens and quickly established herself at the top of the pecking order. 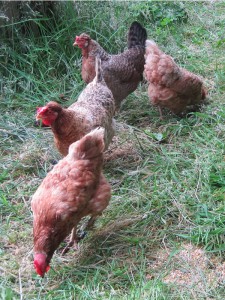 The old hens enjoying life in their new chicken run

Unfortunately two hens succumbed to illness the summer before our move. Dolly and one of the twins died in their sleep, a few days apart. We did not know the cause of their demise, but the other chickens seemed unaffected by our short lived epidemic.

We gave the chickens the run of the back garden until moving day arrived. Our old neighbours offered to house our small brood while we moved home, allowing us time to settle in and prepare the new chicken run. When we picked them up a week later their old tired ark was demolished and the chickens packed into boxes for their journey from a very small back garden to our very small holding.